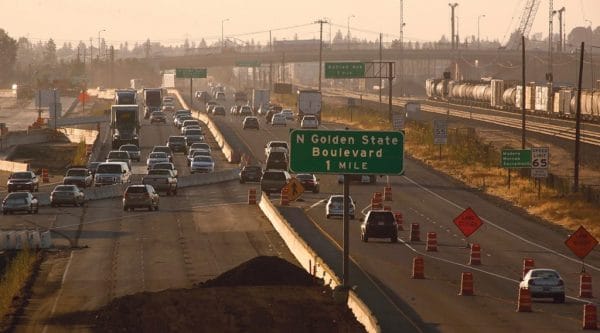 State Route 99 in Fresno, Calif. CARB is presenting its own NOx rule to its board as soon as this spring. (Gary Kazanjian/Associated Press)

More than a year ago, U.S. Environmental Protection Agency officials announced the agency’s Cleaner Trucks Initiative, an effort to work closely with the California Air Resources Board to develop a more stringent “harmonized” nitrogen oxide-emissions rule for heavy trucks.

But earlier this month, EPA held a news conference that suggested it was hardly moving at warp speed, seeking suggestions from stakeholders and technical experts on how to design its NOx emissions regulation.

Meanwhile, while EPA seemingly blinked, CARB — which got out of the gate well ahead of EPA — has quickly forged its way ahead to come up with its own NOx rule, which likely will be presented to the CARB board as soon as this spring. EPA does not plan to issue its final 50-state rule until early 2021, according to EPA Administrator Andrew Wheeler.

“They are separate rule-making processes, but CARB staff meets regularly with EPA staff to exchange information,” CARB spokeswoman Karen Caesar told Transport Topics. “Note that CARB is able to act sooner than EPA, and because of our acute air-quality issues and our need to meet federal health-based National Ambient Air Quality Standards for ozone by 2031 in the South Coast and San Joaquin Valley Air Basins, we are on a somewhat faster schedule.”

Caesar conceded that EPA is in an early stage of its rule-making process and ultimately could adopt similar provisions that might reflect different stringency or timing.

“California jumped quickly out of the gate to address its in-state NOx emissions that they expect to finalize this spring,” said Glen Kedzie, energy and environmental affairs counsel for American Trucking Associations. “EPA, on the other hand, has taken a slower, more methodical approach. With a wide cast of stakeholders supporting the development of one harmonized national NOx standard, EPA’s regulation stands out in an administration that is better known for its deregulatory efforts.”

CARB already has made public a glimpse of its intentions for significant reductions in nitrogen oxide emissions that it calls “technically achievable and cost-effective” for model year 2024 heavy trucks.

CARB’s initial “Low NOx Omnibus Regulation” — as discussed in the agency’s latest staff proposal workshops — for 2024 is .05 grams per brake-horsepower hour to be further tightened in 2027 to .030-.015 g/bhp-hr.

EPA approved a petition in late 2016 addressing a request by more than 20 organizations, including state and local air agencies from across the country, to adopt more stringent NOx emissions standards. However, that same year, CARB already had conducted a workshop outlining some of its initial plans to lower NOx emissions.

In part one of a two-part exploration of autonomous technology today, our latest RoadSigns podcast revisits conversations with CEOs Alex Rodrigues of Embark and Cetin Mericli of Locomation. Hear them explain what testing automated trucks and developing platooning technology has taught them about the road ahead — and get new perspective with host commentary. Listen to a snippet from Rodrigues above, and to hear the full episode, go to RoadSigns.TTNews.com.

Now, nearly four years later, the CARB NOx rule is slated to take effect in 2024, while EPA’s rule is not likely to be implemented until 2027.

In its advanced notice of proposed rulemaking, EPA asked stakeholders to comment on the extent to which EPA should adopt similar provisions to CARB’s rule, and whether similar EPA requirements should reflect different stringency or timing. “For example, how important would it be to harmonize test procedures, even if we adopt different standards? Also, how might standards be aligned if stringencies are harmonized, but timing differs?

In formulating its NOx regulation, EPA said, “One of our high-level principles is to consider and enable effective solutions and give careful consideration to the cost impacts.”

Despite feuding in the courts over a number of CARB’s aggressive regulatory measures for cars and trucks, EPA’s Wheeler claims the agency staffs are sharing technical data on a number of environmental issues.

“Just because they’re suing us, doesn’t mean we don’t get along,” Wheeler said in a news conference earlier this month.