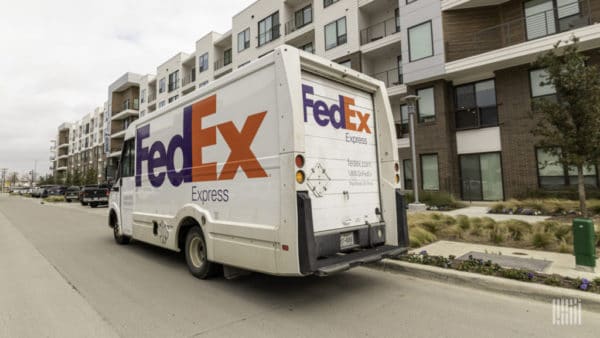 FedEx Corp. announced plans to achieve carbon–neutral operations globally by 2040, with vehicle electrification a key tenet of the strategy.

The company on March 3 said it plans to make an initial investment of more than $2 billion in the initiative, with sustainable energy and carbon sequestration joining electric vehicles as the three key areas of focus.

“We have a responsibility to take bold action in addressing climate challenges,” said FedEx CEO Fred Smith. “This goal builds on our long-standing commitment to sustainability throughout our operations, while at the same time investing in long-term, transformational solutions for FedEx and our entire industry.”

The plan calls for the entire FedEx parcel pickup and delivery fleet to be zero–emission electric vehicles by 2040. The company will follow a phased approach for replacement of existing vehicles; by 2025, it says 50% of purchases for the global FedEx Express fleet will be electric vehicles, and that percentage will rise to 100% by 2030.

FedEx said it also will continue to invest in alternative fuels to reduce aircraft and vehicle emissions. This includes building on an existing initiative that targets reductions in aircraft fuel usage. Since 2012, the company’s Fuel Sense and Aircraft Modernization programs have saved a combined 1.43 billion gallons of jet fuel and avoided more than 13.5 million metric tons of carbon dioxide emissions, it said.

The $2 billion initial investment includes a pledge of $100 million to Yale University to help establish the Yale Center for Natural Carbon Capture, which will be studying methods of carbon sequestration. An initial focus will be on helping to offset greenhouse gas emissions equivalent to current airline emissions. Researchers will develop methods that build on natural carbon storage systems, including biological ecosystems and the geological carbon cycle to improve — where possible — how quickly carbon can be absorbed, how much can be contained and how long it can be stored. Through these efforts, Yale scientists aim to create a portfolio of carbon removal strategies that have impacts on a global scale, FedEx said.

The center will publish and share its findings to provide businesses, industries and governments information that can accelerate adoption and implementation of natural carbon capture strategies globally, FedEx said.

“Addressing climate change is a complex challenge that demands urgent action, and natural carbon capture strategies will be one key part of that action,” said Ingrid “Indy” Burke, the Carl W. Knobloch Jr. Dean of the Yale School of the Environment.

FedEx also has pledged to work with customers to offer end-to-end sustainability for supply chains through carbon–neutral shipping and sustainable packaging options.

The plan also calls for FedEx to continue efforts to improve sustainability at its more than 5,000 sites worldwide through investments in efficient facilities, renewable energy and other energy management programs.

FedEx Corp. ranks No. 2 on the Transport Topics Top 100 list of the largest for-hire carriers in North America.

According to the company, since 2009 its sustainability efforts have contributed to a reduction of approximately 40% in CO2 emissions intensity across its entire enterprise, all during a span in which package volume increased 99%.

“While we’ve made great strides in reducing our environmental impact, we have to do more,” said FedEx Chief Sustainability Officer Mitch Jackson. “The long-term health of our industry is directly linked to the health of the planet, but this effort is about more than the bottom line — it’s the right thing to do.”

He added, “The steps we are taking today will contribute a positive impact for generations to come.”