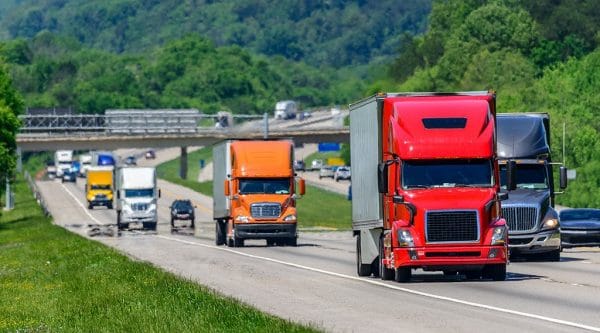 Programs managed by federal trucking regulators would see a funding boost under a $4.8 trillion fiscal 2021 budget request the Trump administration sent to Congress on Feb. 10.

Two key aspects of the Federal Motor Carrier Safety Administration’s budget would increase by nearly 4% from the previous year under the request.

The grants are meant to provide funding to “eligible states to conduct compliance reviews, identify and apprehend traffic violators, conduct roadside inspections and support safety audits on new entrant carriers,” according to background from the administration. The Operations and Programs account backs consumer enforcement efforts, as well as the Compliance, Safety, Accountability (CSA) program.

Overall, the U.S. Department of Transportation in fiscal 2021 would receive $21.6 billion in discretionary spending, which would amount to a 13% decrease from the 2020 enacted level. For mandatory contract authority and obligation limitations, the budget would provide $66.2 billion, an 8% increase from the 2020 enacted level. Programs for infrastructure and freight grants would each receive $1 billion, according to the administration.

The administration pointed to ongoing directives designed to reduce the environmental permitting process, while calling for a 26% decrease in the Environmental Protection Agency’s budget.

Additionally, a proposal for an $810 billion, 10-year reauthorization of highway programs accompanied the request. A source of funding to back such a reauthorization was absent in the budget documents. On the matter of the Highway Trust Fund, which assists states with construction and maintenance, the administration stated, “Additional details on this account will be provided in the proposed surface transportation reauthorization proposal.”

Under the administration’s reauthorization, traffic and motor carrier safety provisions would receive $20 billion.

“Our proposal continues the foundation and the funding path begun in the FAST Act, while also providing states and other entities with dependable and predictable resources for an entire decade,” Transportation Secretary Elaine Chao told reporters Feb. 10.

The FAST Act, a five-year Obama-era highway law, expires in September. In the following months, officials plan to present Congress with a comprehensive reauthorization proposal. Analysts estimate the trust fund will be insolvent in less than two years.

On Capitol Hill, Senate Majority Leader Mitch McConnell (R-Ky.) told reporters after the budget’s release, “We have the highway bill that we need to address this year.”

No timeline for doing so was provided. Senate committees that oversee the Highway Trust Fund, public transit and commercial transportation have yet to offer input for a highway reauthorization.

.@POTUS is requesting $89 billion for DOT in FY 2021 funding- a nearly 2 percent increase above FY2020 appropriations. DOT’s portion of the President’s FY2021 budget request can be viewed here: https://www.transportation.gov/budget

Unsurprisingly, Democrats in the majority in the House shot down the president’s request. Rep. David Price (D-N.C.), chairman of the transportation funding committee, said, “The steep cuts to affordable housing and transportation are particularly heinous.” Speaker Nancy Pelosi (D-Calif.) described it as an “insult to the hopes and dreams and aspirations of America’s working families.”

Reactions about the budget varied in transportation policy circles. Romina Boccia with The Heritage Foundation argued several policies that were outlined amounted to missed opportunities. As she put it, “The administration must stay the course and not fall prey to using the budget as a vehicle for problematic policy initiatives, including misguided infrastructure funding from Washington and a federal encroachment in education policy.”

In an analysis of the budget request highlighting the absence of a direct source of funding for highway projects, the leadership at the American Road and Transportation Builders Association sought optimism. “While presidents from both parties find many of their budget requests unfulfilled at the end of the process, the budget is still important because it lays out their priorities for the coming years,” ARTBA indicated. “We still have a long way to go in an election-shortened legislative session, but having the White House, House and Senate all pushing in the same direction is a welcome development.”