In Middle of Trade War, Port of Los Angeles Terminal Gets Ready for Robots 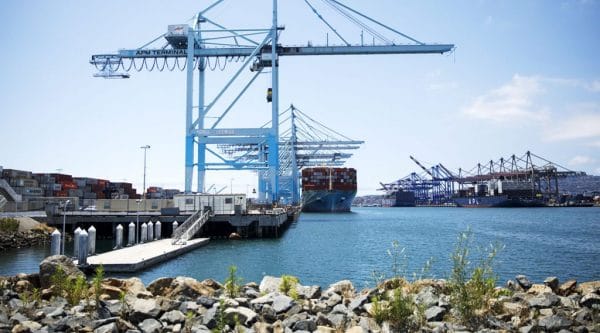 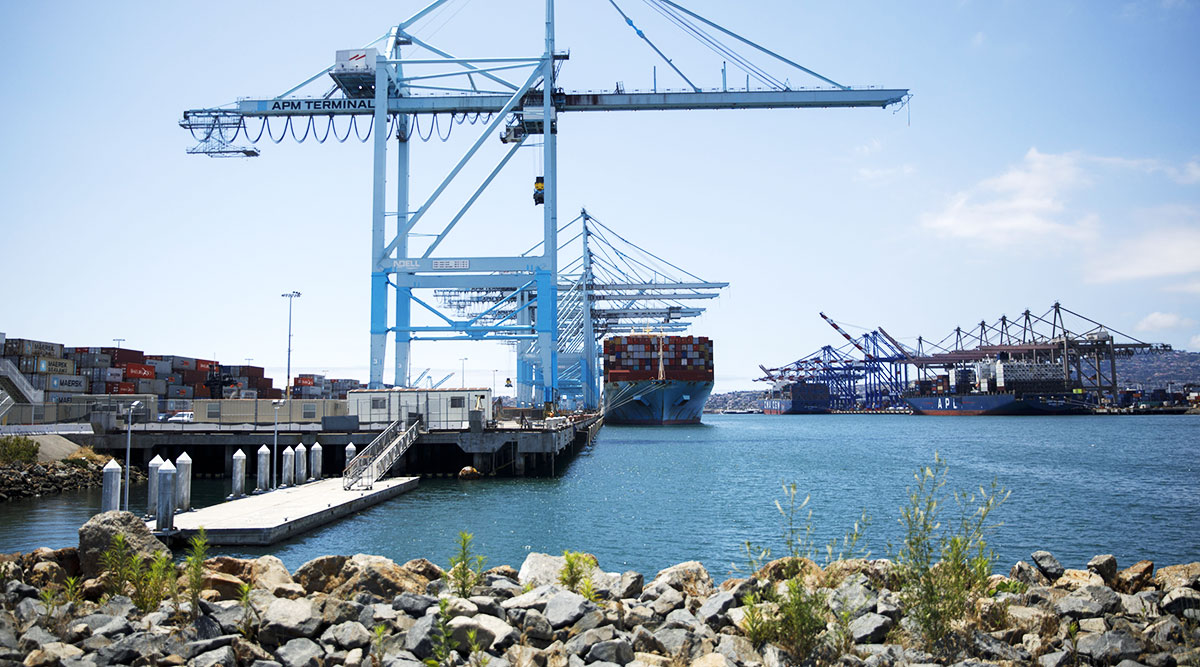 Pier 400 in Los Angeles is North America’s largest shipping terminal. More than 1,700 trucks pass through on average per day, even in the middle of the U.S.-China trade war. All that cargo translates into thousands of miles driven within the facility each day, mostly by pollution-spewing diesel vehicles.

For APM Terminals, the part of global shipping company A.P. Moller-Maersk A/S that runs the Los Angeles terminal, the future of cargo handling looks like the future of driving: electric motors replacing gasoline engines, autonomous software replacing human workers. The company said the changes are necessary to meet California rules requiring container terminals to reach zero emissions by 2030 and to keep business from leaving for other coasts.

The Los Angeles terminal already has ordered an electric, automated carrier from Finnish manufacturer Kalmar, part of the Cargotec Corp., that can fulfill the functions of three kinds of manned diesel vehicles: a crane, top-loader and truck. With enough of those, APMT could eliminate 65,000 miles driven daily by diesel trucks and cranes.

There would be fallout, though. The move to a robotic, emissions-free operation may cut the need for workers such as Anthony Armijo, a part-timer who has spent 15 years picking up leftover dock shifts. 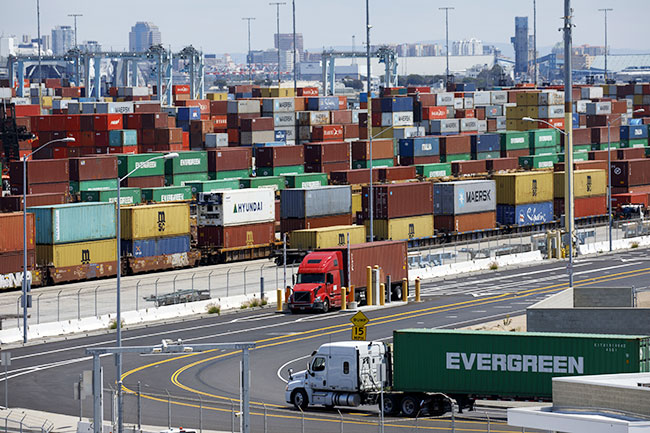 Semi-trucks drive past shipping containers in the APM shipping terminal at the Port of Los Angeles. (Patrick T. Fallon/Bloomberg News)

“I just don’t understand what we’re going to be doing in the future,” he said. “I’m an American citizen. You would think they would have a way for us to make a living.”

The International Longshore and Warehouse Union, which represents dockworkers across the West Coast, has gathered support from local, state and federal politicians for its effort to prevent the municipal board running the port from letting the company proceed with its plans. Los Angeles Mayor Eric Garcetti, who has set his own emissions targets as part of his Green New Deal, is brokering negotiations for a deal this month.

The conflict is one of many pitting progressive clean-energy initiatives against blue-collar jobs threatened by changing technology.

“Automation is the path of history,” said Dan Sperling, a member of the California’s Air Resources Board and professor of civil engineering and environmental science at the University of California-Davis. “The questions are how much automation really makes sense, and how do you deal with the disruption to the workers?” 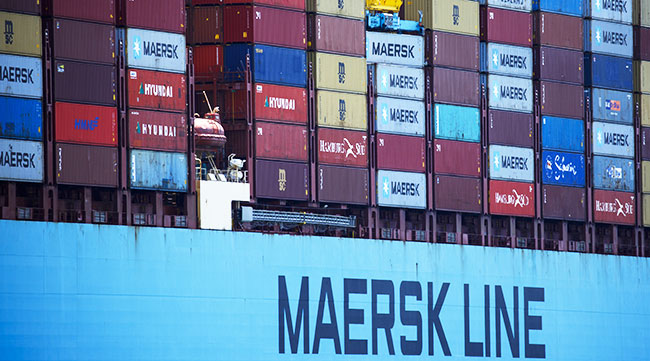 Wim Lagaay, CEO of APM Terminals North America, sees cleaner, safer systems that meet the demand for quicker shipping as a way to secure the future of the port, which drives billions of dollars in economic activity.

The escalating trade tensions underscore the need for ports to stay competitive amid forces they can’t control — especially the ports of Los Angeles and Long Beach, which moved 46% of Asian imports last year, according to a study commissioned by the Pacific Maritime Association, which handles West Coast labor agreements on behalf of member companies. The ongoing U.S.-China dispute already is affecting business. Exports to China moving through Los Angeles and Long Beach declined by 35%, and imports from China dropped by 11.5% in this year first quarter, from the same period in 2018.

“We have an exacerbated trade balance now,” said Phillip Sanfield, a spokesman for the Port of Los Angeles. “We see increased tariffs leading to a reduction in cargo volume, which equals a reduction in economic activity and jobs in Southern California.” 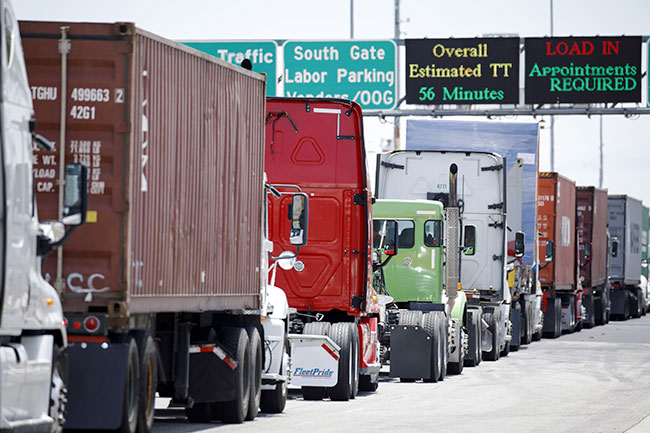 The terminal has ordered an electric, automated carrier from Finnish manufacturer Kalmar, part of the Cargotec Corp., that can fulfill the functions of three kinds of manned diesel vehicles: a crane, top-loader and truck. (Patrick T. Fallon/Bloomberg News)

Lagaay said the plans to modernize Pier 400 in Los Angeles “are not affected by the current trade negotiations.”

Automation comes with several advantages: It lowers operating costs, boosts efficiency and allows terminals to run 24/7. A truck dropping off an empty container and picking up another full of cargo can stay in one spot for both transactions, instead of traveling to different parts of a sprawling wharf and idling in wait in a conventional system. A robotic port also avoids the peril of worker slowdowns during contract talks, which crippled West Coast freight in 2014 and 2015.

American ports have lagged those in Europe and Asia in adopting driverless technology. Of the 44 shipping terminals that are either semi-automated or fully automated, just five are in the United States, according to data from Moody’s Investors Service. Two of them are neighbors of Pier 400: TraPac Los Angeles, a unit of Mitsui O.S.K. Lines Ltd., and Long Beach Container Terminal in the Port of Long Beach, which in April was sold to Macquarie Asset Management. 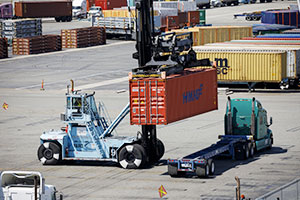 A worker operates a loaded container handler to place a shipping container on a semi-truck at the Port of Los Angeles. (Patrick T. Fallon/Bloomberg News)

The same company also manufactured the automated cranes at Long Beach Container Terminal, where the technology is “state of the art,” said Moses Kopmar at Moody’s Investors Service. Long Beach also uses automatic-guided vehicles built by Terex Corp. that move among the ships and stacks of containers, guided by sensors embedded in the ground. Even the terminal facility to replace batteries for the vehicles is automated.

“The reality is, if you want to be competitive, you do have to go towards automation,” said Lee Klaskow, a Bloomberg analyst.

West Coast ports more keenly feel the pressure to be competitive, given that their per container costs range up to 165% higher than those of East Coast and Gulf Coast ports, according to the Pacific Maritime Association. Another threat comes from the opening of the wider Panama Canal in 2016, which allows shippers to bypass California. Los Angeles and Long Beach have seen their share of U.S. cargo drop to 37%, from 41% five years ago.

When the $1.5 billion fully automated system at Long Beach Container Terminal is complete in 2021, it will handle twice as much freight as before, while cutting pollution. Already, the wharf is showing greater efficiency than its neighbors. In April, the average time it took trucks to complete their assignments at that dock was 34 minutes, compared with 105 minutes at Pier 400, according to data from the Harbor Trucking Association.

Paving the way for the Long Beach and TraPac projects was a contract the dockworkers union and terminal operators struck in 2008 and renewed in 2014 that specifically allowed robotics to replace workers. In exchange, full-time longshoremen got higher pensions and guarantees that if the technology displaced them, they would still be paid for 40-hour weeks until retirement. The average full-time worker makes $183,000 a year, with foremen earning $281,555, according to the maritime association.

A surge in business has seen the full-time workforce actually increase from last year, to 15,095, association spokesman Randy James said. There has been no need to tap the wage guarantee with plenty of work to go around. The union declined to comment for this story.

In the plan for Pier 400, APM Terminals would take several years to phase in 100 automated straddle carriers. Humans still would be needed to unload containers from ships and place them onto rail cars, as well as to maintain the robots. Lagaay of APM Terminals declined to say how much the project costs. There are no plans to introduce driverless technology in the company’s North American portfolio, he said, but its terminals in the Netherlands, Italy, Mexico and Morocco currently use some form of automation.

For Sandy Marchioli, the owner of a neighborhood bar where longshoremen make up more than half of her patrons, the fear is that automation would consume more and more of the work — leaving locals jobless and her with less business. “Everyone’s very anxious and nervous,” she said.

The changes may be inevitable. “Technology advances are really a part of our everyday life,” Lagaay said. “That requires ongoing meaningful dialogue with the workforce as to how this will look in the future.”