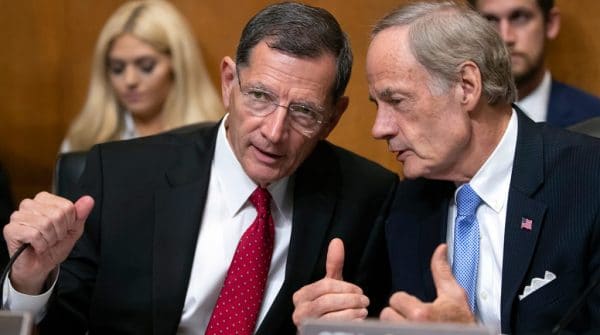 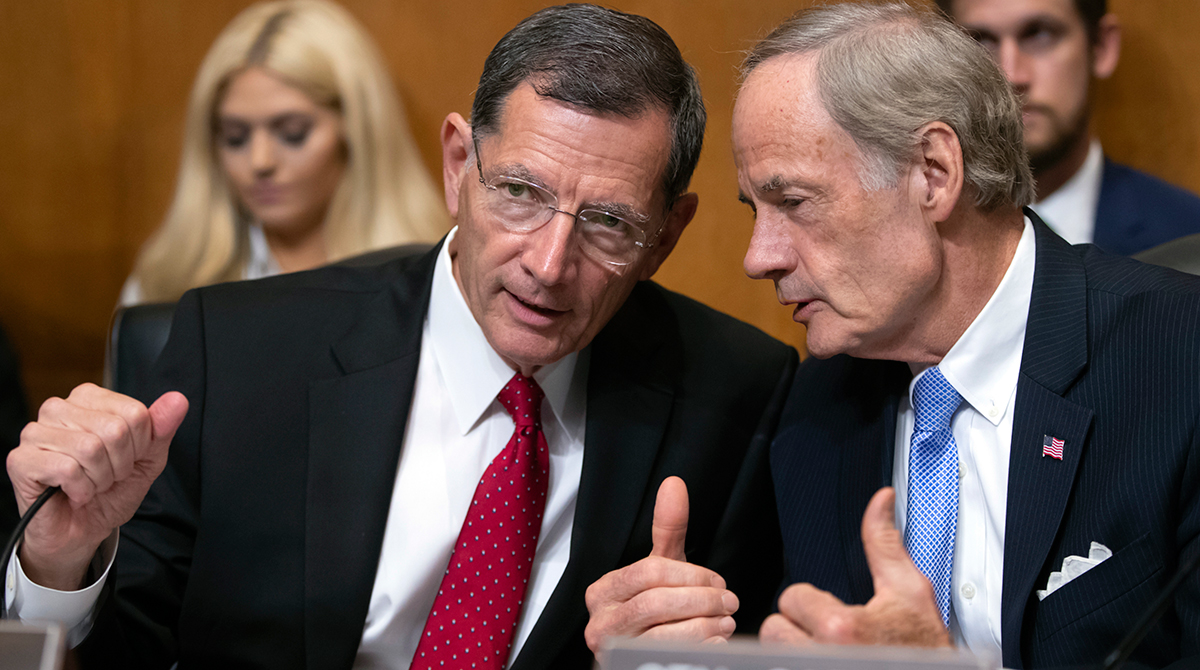 Barrasso (left) and Carper by the Associated Press

The Environment and Public Works Committee approved the legislation that would reauthorize provisions of the 2015 highway law Fixing America’s Surface Transportation (FAST) Act, as amended by a vote of 21-0.

The bill would carve out funding for bridge repairs, as well as seek to rehabilitate freight and commuter corridors, streamline the environmental permitting process, and enhance severe weather-resilient infrastructure programs.

“Our bipartisan legislation will help rural communities in Wyoming and major urban areas around the country. I am thankful to ranking member [Tom] Carper and all the members of our committee for working with me to advance the most substantial highway legislation in history,” said committee Chairman John Barrasso (R-Wyo.).

“For far too long, our country has leaped from one highway funding crisis to the next and failed to implement forward-looking solutions to the challenges facing our transportation sector,” added Carper (D-Del.).

Despite the panel’s action, policymakers have not addressed the legislation’s funding mechanism.

The FAST Act’s funding authority expires in the fall of 2020.

Senate committees with jurisdiction over tax-writing authority, the nation’s freight policy and transit systems have yet to schedule legislative hearings on aspects of the FAST Act reauthorization.

The House also has yet to indicate when it would consider its version.

Neither the EPW leadership nor President Donald Trump publicly outlined a plan for identifying a source of funding for the legislation. The Highway Trust Fund, an account used to help states and relying on dwindling revenue from the fuel tax, is expected to be insolvent in a couple of years.

The federal fuel tax on diesel is 24.4 cents a gallon and 18.4 cents on a gallon of gasoline.

Trump, who insisted he would advance an infrastructure modernization plan during his tenure, expressed support for the Senate bill via social media: “Senate is working hard on America’s Transportation Infrastructure Act. Will have BIG IMPACT on our highways and roads all across our Nation. Interest strong from Republicans and Democrats. Do I hear the beautiful word, BIPARTISAN? Get it done. I am with you!”

“While there is still a big question about how we pay for these investments, I remain committed to working with my colleagues in both the House and the Senate on forward-looking, large-scale improvements to our nation’s infrastructure that can create jobs, improve safety and efficiency, and move our transportation infrastructure into the 21st century and beyond,” DeFazio said in a statement provided to Transport Topics on July 31.

A number of prominent stakeholders who have called for congressional action this year on legislation that would modernize the country’s infrastructure, such as roads, bridges and ports, expressed optimism after the Senate panel’s passage of the legislation.

“The strength of our economy relies on sound roads and bridges, as more than 70% of our nation’s goods travel by highway on the back of trucks. With the right investment, we can stem America’s deepening infrastructure crisis and instead achieve a 21st century infrastructure worthy of the world’s leading economy. We look forward to working closely with this committee and the other relevant committees on a legislative package that includes the long-term, sustainable funding that our highway programs critically need.”

“The reports of the death of bipartisanship on Capitol Hill have been greatly exaggerated at least when it comes to transportation policy,” said American Road and Transportation Builders Association CEO Dave Bauer. His group, along with the U.S. Chamber of Commerce, has endorsed a fuel tax increase as a way of resolving the Highway Trust Fund’s looming insolvency. “Final passage of a bill this year provides a meaningful opportunity for members of Congress and the Trump administration to deliver on the infrastructure investment promise they have been making since the 2016 elections.”

Specifically, the Senate bill would propose increasing the maximum number of highway miles that may be designated critical rural freight corridors from 150 to 300 miles.

It would establish a set-aside fund of $150 million annually for a pilot program designed to encourage applicants to expand their nonfederal share of project costs. The emergency relief program would be enhanced to address infrastructure resiliency. The environmental review process would be streamlined through a “one federal decision” approach that would require a federal agency to proceed with a schedule for a major project.

The bill would establish a new competitive grant program to help state, local and tribal officials rehabilitate or replace bridges determined to be structurally deficient. It would establish a competitive grant program to reduce idling and emissions at ports. It would add resilience, economic growth and competitiveness, strategies aimed at reducing pollution in the national freight strategic plan. And it would require the secretary of Transportation to develop an agreement with the Transportation Research Board meant to identify safety benefits of vehicle-to-infrastructure connectivity technologies.

The bill also would repeal rescissions in Federal-aid Highway Program contract authority that were enacted through the FAST Act.