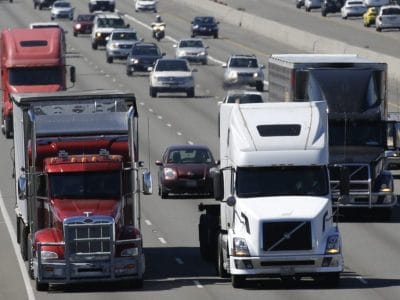 Trucking companies are flexing their pricing power, pushing retailers and manufacturers to pay more to buy into a strong U.S. economy and adding to inflation pressures in supply chains.

Third-quarter reports from major trucking companies suggest gains are being driven by tight capacity that is pushing shippers to pay more to move goods, even as volume indicates the high demand that flooded truckers with freight earlier in the year is leveling off.

Phoenix-based Knight-Swift Transportation Holdings Inc., KNX +1.85% the largest truckload company in the U.S., said a key measure of its pricing strength—revenue per loaded mile—was up 19.9% at its core trucking operations in the September quarter from the same period in 2017. Revenue at the Knight Trucking segment rose 31%, and operating profit at the unit increased to $56.5 million from $8.6 million.

Transportation companies have benefited from a more than yearlong stretch of robust shipping demand as strong economic growth pushes more freight through logistics networks. At the same time, tight capacity has given carriers more leverage on price, spurring double-digit increases in the long-term contract rates shippers negotiate with transport providers.

The Cass Truckload Linehaul Index, which measures per-mile pricing for truckload carriers, rose 9.8% in September compared with the same month in 2017.

The prices are rising as truckers pass along higher labor costs, including higher driver pay and higher recruiting costs in what companies say is one of the tightest labor markets in years. Companies such as Werner Enterprises Inc. WERN +2.99% are investing in new equipment to help lure drivers in an “increasingly difficult” labor market that the Omaha, Neb., carrier said “limited our sequential fleet growth in third quarter 2018.”

J.B. Hunt Transport Services Inc. JBHT +1.48% said in reporting its third-quarter results this month that it had raised pay at a double-digit pace and that it was passing along the higher costs to shipping customers.

T.G.S. Transportation Inc., a Fresno, Calif., carrier that hauls loads between California’s major seaports and the state’s Central Valley agricultural region, says it nearly tripled its usual 3% to 4% annual wage boost, and began offering bonuses to company drivers with good gas mileage and safe driving records. Although some customers have balked at rate increases, which come as fuel prices are also on the rise, overall business has been growing, said Peter Schneider, the company’s executive vice president.

The higher costs are weighing on earnings at retailers and manufacturers, and businesses including food companies Hershey Co. and Nestlé SA, heavy-equipment maker CaterpillarInc. and industrial supplier Owens Corning said they are raising prices to their customers to help offset those expenses.

Still, there are signs the freight market is cooling off. The American Trucking Associations’ monthly tonnage index fell by 0.8% from August to September, and spot-market trucking rates monitored by online freight marketplace DAT Solutions LLC reached the lowest point of the year in the week ended Saturday.

Shipping prices are “definitely stabilizing,” said Avery Vise, vice president of trucking at research firm FTR. “What do we see is a substantial deceleration of the year-over-year increases in those rates. It will be more digestible for shippers.”